The Arctic ice cap melted this summer at a shocking pace, disappearing at a far higher rate than predicted by even the most pessimistic experts in global warming. But we shouldn’t be shocked, because scientists have long known that major features of earth’s interlinked climate system of air and water can change abruptly.

A big reason such change happens is feedback — not the feedback that you’d like to give your boss, but the feedback that creates a vicious circle. This type of feedback in our global climate could determine humankind’s future prosperity and even survival. 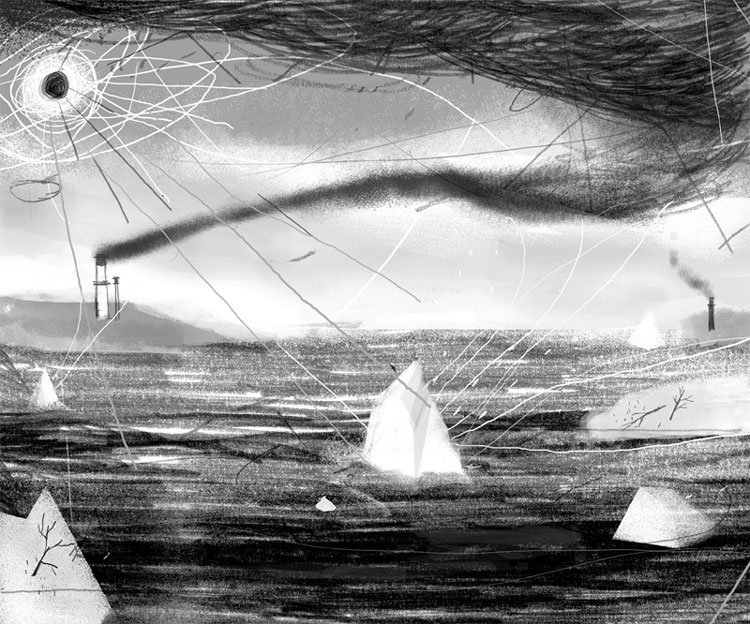 Illustration by Jon Han for The New York Times

The vast expanse of ice floating on the surface of the Arctic Ocean always recedes in the summer, reaching its lowest point sometime in September. Every winter it expands again, as the long Arctic night descends and temperatures plummet. Each summer over the past six years, global warming has trimmed this ice’s total area a little more, and each winter the ice’s recovery has been a little less robust. These trends alarmed climate scientists, but most thought that sea ice wouldn’t disappear completely in the Arctic summer before 2040 at the earliest.

The loss of Arctic sea ice won’t be the last abrupt change in earth’s climate, because of feedbacks. One of the climate’s most important destabilizing feedbacks involves Arctic ice. It works like this: our release of carbon dioxide and other greenhouse gases around the planet causes some initial warming that melts some ice. Melting ice leaves behind open ocean water that has a much lower reflectivity (or albedo) than that of ice. Open ocean water absorbs about 80 percent more solar radiation than sea ice does. And so as the sun warms the ocean, even more ice melts, in a vicious circle. This ice-albedo feedback is one of the main reasons warming is happening far faster in the high north, where there are vast stretches of sea ice, than anywhere else on Earth.

Scientists have done a good job incorporating some feedbacks into their climate models, especially those, like the ice-albedo feedback, that operate directly on the temperature of air or water. But they haven’t incorporated as well feedbacks that operate on the atmosphere’s concentrations of greenhouse gases or that affect the cycle of carbon among air, land, oceans and organisms. Yet these may be the most important feedbacks of all.

Global warming is melting large areas of permafrost in Alaska, Canada and Siberia. As it melts, the organic matter in the permafrost starts to rot, releasing carbon dioxide and methane (molecule for molecule, methane traps far more heat in the atmosphere than carbon dioxide).

Warming is also affecting wetlands and forests around the world, helping to desiccate immense peat bogs in Indonesia, contributing to more frequent drought in the Amazon basin, and propelling a widening beetle infestation that’s killing enormous tracts of pine forest in Alaska and British Columbia. (This infestation is on the brink of crossing the Canadian Rockies into the boreal forest that extends east to Newfoundland.) Dried peat and dead and dying forests are vulnerable to wildfires that would emit huge quantities of carbon into the atmosphere.

This summer’s loss of Arctic sea ice indicates that at least one major destabilizing feedback is gaining force quickly. Scientists have also recently learned that the Southern Ocean, which encircles Antarctica, appears to be absorbing less carbon, while Greenland’s ice sheet is melting at an accelerating rate.

When warming becomes its own cause, we might not be able to stop extremely harmful climate change no matter how much we cut our greenhouse gas emissions. We need a far more aggressive global response to climate change. In the 1960s, mothers learned that the milk they were feeding their children was laced with radioactive material from atmospheric tests of nuclear weapons and that this contamination could increase the risk of childhood leukemia. Soon women organized themselves in the tens of thousands to demand that nuclear powers ban atmospheric testing. Their campaign largely succeeded.

In response to the new dangers of climate change, we need a similar mobilization — of mothers, of students and of everyone with a stake in the future — now.

Thomas Homer-Dixon, a professor of peace and conflict studies at the University of Toronto, is the author of “The Upside of Down: Catastrophe, Creativity and the Renewal of Civilization.”