Globe and Mail, March 8, 2008
by Thomas Homer-Dixon and David Keith

What should we do with the carbon we produce when we burn fossil fuels? Some experts say we should fight climate change by putting the carbon back underground, whence it came.

As is true of any large-scale energy technology, CCS carries costs and risks. The Intergovernmental Panel on Climate Change, the world’s leading expert body on these topics, has estimated that CCS’s costs are competitive with other leading ways to cut emissions and that its risks are small compared to those of related industries, such as underground storage of natural gas. CCS is not a magic bullet. But many climate and energy experts think that it’s among humanity’s best tools to control carbon emissions.

Yet almost all Canada’s environmental groups panned the panel’s recommendation. And these groups’ opposition is clearly slowing CCS’s development. Governments spend money to win the support of various interest groups, so they’re reluctant to commit major funding to CCS — an environmental initiative — as long as environmental groups don’t like it. In last week’s budget, the federal government announced just $240-million in CCS funding, far less than previous support for biofuels and wind power.

By opposing CCS, environmental groups are gambling that we can make the huge cuts in CO2 emissions we need simply by improving our energy efficiency and using renewables like solar and wind power. They may be right. But if they’re wrong, they could cripple action against climate change — the greatest environmental threat of our age. It’s a dangerous, and seriously imprudent, gamble.

In criticizing the panel’s proposal, environmental groups focused their ire on the use of government money to jump-start CCS technology. As John Bennett, of ClimateforChange.ca, put it, “The cost of cleaning up an industry should come out of the profits of the industry, not the taxpayers’ pockets.”

In many respects, these criticisms are fair. Ideally, polluters should pay to clean up their pollution. Governments should use taxes and technology-neutral regulations to put a price on carbon emissions, which would push industries to make deep reductions. Solutions would then come from the bottom up, and government would stay out of the business of choosing the best ways to cut emissions. Industries such as coal-fired electrical utilities and Alberta tar-sands processors that can generate relatively pure streams of CO2 might decide to go the CCS route and pay the cost of putting their emissions underground.

Yet the sad reality is that it will take years and maybe decades to untangle Canada’s baroque energy and climate policies and to replace them with transparent and simple regulations based on the “polluter pays” principle. Environmental groups are wrong to argue that we shouldn’t use government funds to support promising technologies before the mess is straightened out. We don’t have the time to wait, because Earth’s climate is changing fast, now.

Without carbon prices or regulation, public funding is the only way to ensure that CCS technology gets going quickly. Such an investment today would bring a double return: near-term emissions reductions and, more important, the option to use CCS at a much larger scale later. By 2015, we would have “kicked the tires,” by trying out CCS at full industrial scale. Then we would be able to count on the technology if we need it on a vastly larger, economy-wide scale in the following decades.

If the real root of the opposition to CCS were the belief that the polluter should pay, environmental groups would also be attacking subsidies for wind power, biofuels and solar panels.

Environmental groups have lobbied long and hard for such subsidies. But if they simply wanted the polluter to pay, they’d surely argue we should cut subsidies and wait for carbon prices. Although it’s true, for instance, that wind power doesn’t release much carbon pollution, it’s certainly part of the electricity industry. And applying the polluter-pays principle to electricity would mean, once again, pricing or regulating carbon and letting the industry find the cheapest ways to cut its carbon output — with wind power a leading competitor.

Environmental groups might say that coal, oil and tar-sands companies are rich, so they don’t need more government money. But the distinction doesn’t make sense: Most of the profit from government incentives for wind power ends up with the big technology providers such as General Electric’s wind turbine division. Why is it fine to subsidize wind power when the money goes to multinationals like GE, yet it isn’t acceptable to subsidize Canadian companies to build made-in-Canada CCS technology?

There are likely two deeper reasons why environmental groups dislike CCS. First, most of these groups want to believe that we can make deep cuts in carbon emissions using renewables and improvements in efficiency alone. Few advocate CCS, and almost none support nuclear power. 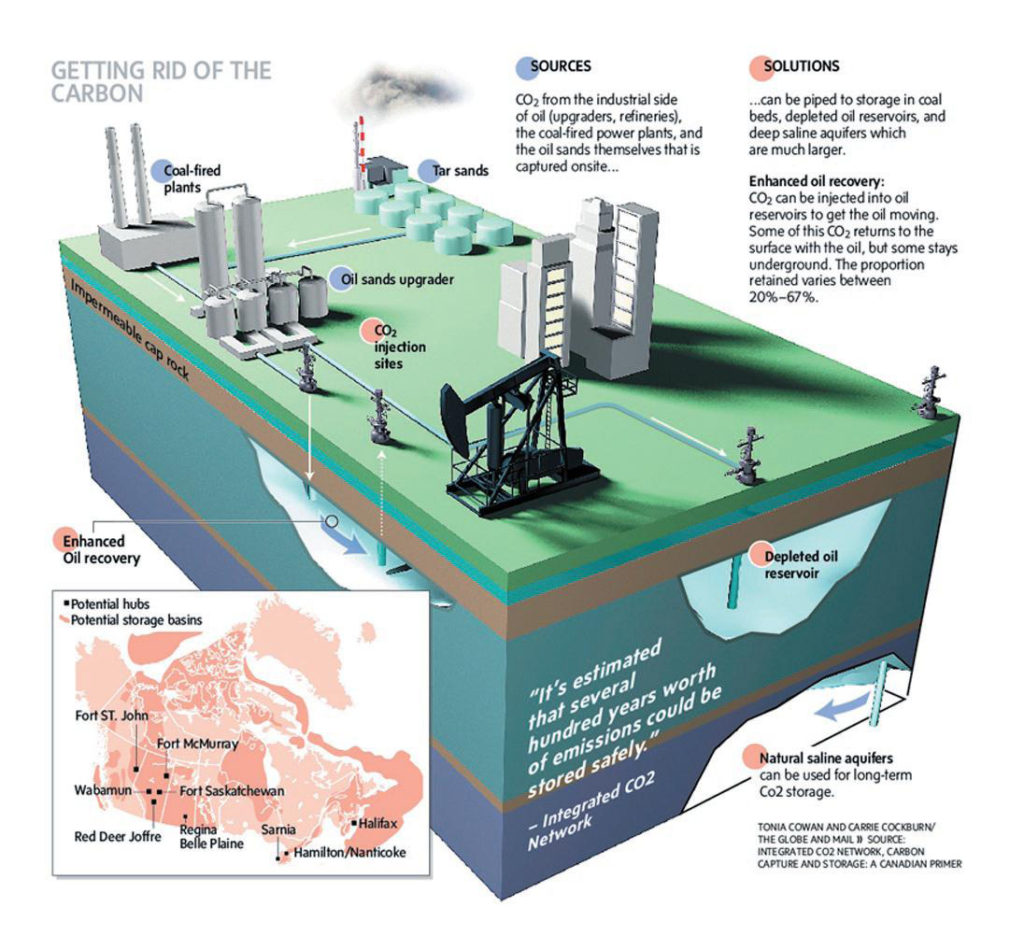 This position reflects a profound failure to grasp the scale of humankind’s carbon-energy crisis. To limit dangerous climate change, we need to cut emissions sharply very soon, so we must use technologies close at hand. Even holding greenhouse gases in the atmosphere to double their pre-industrial level — a limit that still risks severe climate disruption — will require reducing worldwide emissions about 80 per cent below their business-as-usual level by 2050. Such a huge cut, even over 40 years, will require a staggering transformation of the global energy system.

Yet for the foreseeable future, modern societies and their industries will depend on centralized sources of high-reliability power to supply a large fraction of their energy. Nuclear reactors and coal-fired plants with CCS are arguably the only two methods of generating massive quantities of reliable low-carbon power using today’s technologies. We can probably afford to reject one of these two options and still cut emissions quickly. But if we reject both, the problem gets vastly tougher and perhaps impossible. Why fight with one hand tied behind our back?

The second reason environmental groups don’t like CCS is in some ways more pernicious: a deep suspicion of big business and big industry that’s a residue of the leftism of the original environmental movement. In recent years, most such groups have accepted that markets must play a central role in any response to climate change, and some work effectively with business, but many still harbour an almost reflexive distrust of capitalists and capitalism.

CCS will be a big-industry technology: major implementation will require huge outlays of capital and armies of scientists, engineers and construction workers. It will also generate huge profits. So when environmental groups saw that industry representatives dominated the blue-ribbon panel, they assumed that the energy industry was once again positioning itself to line its pockets, and attacked its recommendations. As Dave Martin of Greenpeace Canada put it, “Carbon capture is a public relations smokescreen for the tar sands and coal-fired electricity generation.”

It’s time that Canada’s environmental groups freed themselves of this ideological straitjacket. They need to acknowledge that modern capitalism is the most dynamic, innovative and adaptive economic system human beings have ever invented. It’s true that capitalism has fuelled our climate problem, and that many big businesses have lobbied hard to block serious action, but we’re not going to solve the problem without capitalism’s help — albeit capitalism that’s ultimately guided by strong government-imposed constraints.

In this respect, Canada’s environmental groups are out of step with others around the world, such as Environmental Defense and the Natural Resources Defense Council in the United States and several groups in Europe. These groups have come to understand that they must work constructively with big business to get capitalism’s extraordinary energy focused in the right direction, using technologies that include CCS.

In Canada, supporting this technology would also be politically astute. Without CCS, fossil-fuel industries would only lose under any tough climate policy, but with CCS some industries will win and some will lose, which will help split apart the coalitions that oppose real action and making it easier to craft the grand bargain among interest groups that truly commits Canada to deep cuts in carbon emissions.

Many business leaders — even those in energy industries — realize the urgency of the problem. They care about their children’s future like anyone else. And they’re tired of constantly being tarred as the bad guys. The environmental community should give these leaders a way to tackle climate change while preserving part of their industry.

Canada’s environmental groups can identify the industry leaders who support aggressive action on carbon and then work with them to find win-win-win solutions that benefit the environment, Canadian society and industry, too. CCS is just such a solution.

David Keith holds the Canada Research Chair in Energy and the Environment at the University of Calgary and served on a CCS task force.