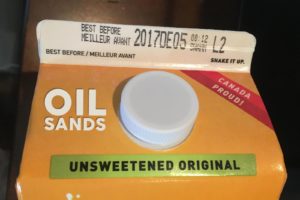 Alberta chose the wrong path when it doubled down on the “junk energy” contained in the oilsands in recent years, and must move fast to join the energy transition away from fossil fuels if it hopes to avoid falling off the climate change cliff, political scientist Thomas Homer-Dixon told an Edmonton audience Tuesday.

“Alberta has made some very bad choices,” said Homer-Dixon, Chair, Global Systems, Balsillie School of International Affairs, at the University of Waterloo. “I think it is likely, 20, 30, 40 years from now, in retrospect, when people look back, there will be a consensus that the major commitment that Alberta made to heavy oil extraction was a mistake.”

In a keynote address to the Spark 2017 conference hosted by Emissions Reduction Alberta and Alberta Innovates, Homer-Dixon urged the province to use its expertise developed for the oil and gas industry to transition to an ideas and knowledge based export economy. He also urged investigation into other, more sustainable alternative energy sources where Alberta could have a competitive advantage, such as ultra-deep enhanced geothermal power production and underground coal gasification.

Homer-Dixon, who has published several articles and books, including The Ingenuity Gap and The Upside of Down, specializes in the relationship between society and the natural world, the causes of violent conflict, failures of economic systems and the impacts of technologies in an increasing complex world.

While a recent National Energy Board (NEB) report saw mined and in situ bitumen production continuing to make up the substantial proportion of Canadian crude output to 2040, even in a high carbon price environment scenario, Homer-Dixon said that is substantially based on International Energy Agency (IEA) estimates, and the IEA “has been consistently wrong about a lot of stuff over many decades.” In particular, it did not see coming the dramatic decline in the costs of wind and solar power in recent years.

Similarly, the electric vehicle revolution will come sooner than most expect, he said. While one of the more aggressive forecasts of EV uptake, from Bloomberg New Energy Finance, predicts that 35 per cent of all vehicles sold will be electric by 2040, Homer-Dixon suggested a recent University of Toronto study predicting close to 100 per cent EV takeup by 2040 or 2050 might be more accurate.

EV penetration combined with other low carbon initiatives could see oil production in Canada peak sooner than expected, he said. Production of the most expensive and carbon-intensive crudes, such as that derived from bitumen, would be most vulnerable to lower oil demand.

“Whether it is a decade, two decades, three decades or even four decades in the future, there is a best-before date on heavy oil in Canada, and we need to recognize that. It’s really important for Alberta to find the alternative pathways forward for the Alberta economy because if Alberta doesn’t succeed, Canada doesn’t succeed,” said Homer-Dixon, who was raised on Vancouver Island and worked on Alberta drilling rigs as a young university student.

“I don’t think we can take bitumen’s sow’s ear and turn it into a silk purse, to be blunt,” he continued. “Why? First of all, bitumen is junk energy. Sorry, but your energy return on investment is around four- or five-to-one. You get about four times as much energy back as you invest in getting the energy out in the first place. That’s a crummy return.

“If you look at other energy sources around the world, fracking for instance in the Dakotas, in Texas, in sweet spots in the tight oil plays, the energy return on investment is around 15- to 20-to-one. So you are really fighting uphill against thermodynamics here — the energy content of the bitumen.”

Secondly, the oilsands produce a product that is largely burned in a distributed transportation system, he said. “No matter how good you get at ramping down the carbon emissions at the production end, you are still producing something that is burned in a transportation system that in turn produces carbon dioxide in the future. And that is going to stop, because we are going to see a transition to electric vehicles. There are good reasons to think this might go a lot faster than some folks have recently been arguing.”

In addition to their lower emissions profile, EVs are cheap to run, are extremely low maintenance with few moving parts and can provide power back to a residence or the grid. And eventually, improved battery technology will take care of range anxiety. Once the range gets beyond a certain threshold, rate of adoption is likely to be rapid, he said. Subsequent decreased oil demand could render expensive oil, over $50 a bbl, permanently uneconomic. “We could quibble about the numbers but this change is coming and I don’t think it makes sense to bet the Alberta economy on it being slow.”

The province’s drive to deliver the oilsands has created enormous concentration of capital and assets around the industry and made the province much less flexible in adapting to a rapid change in global energy systems, he said after the keynote. “Because it has got so much capital [invested], that provides huge incentive for people to believe that the problem of climate change and the problem of this energy transition will just go away — it’s all a bunch of environmentalists and corrupt scientists who are saying that, [and] this is just nonsense.

“Because the vested interests are so deeply embedded in this province — quite understandably, because of the commitment to this resource — it makes it very difficult to change. And there is nothing bad or malicious or perverse about Alberta, this is just normal human stuff. But the province went all-in on bitumen, and the irony is, it was the product of enormous technical innovation and ingenuity.”

Can Alberta get itself onto a new pathway? “I am arguing that the time is late, but it is definitely possible because Alberta has, as a result of this investment, enormous expertise, much of which it turns out is actually quite transferable to technologies like ultra deep geothermal. But we need to shift our mindset from exporting stuff to exporting ideas, and engineering expertise.”

The centre of gravity has shifted around climate and provincial leaders need to have a very frank conversation with the people of Alberta, he suggested, “and we need to be honest with ourselves about the challenge we are facing.

“Or it can proactively start planning and aggressively innovating and investing in new pathways… Saudi Arabia is doing it, [realizing] the writing is on the wall.”

He indicated the province has started moving in the right direction on the climate file, though that situation could change. “I think that given the political landscape, that they have been doing about as well as they can. This is really hard— a lot of people don’t want to believe how serious the situation is. I am very concerned that the province is going to be rolled back.”

“I am actually not politically partisan in any way,” he added, “but I think that in general, the attempts that [Premier Rachel] Notley has made to build a compact in this province around carbon is exactly what needed to be done.”

Outside of Canada, Homer-Dixon said he expects a worldwide carbon price will be in place by 2030, and could be approaching $100 a tonne by then. Widespread carbon capture and storage will need to be developed and geoengineering of the atmosphere will probably become a necessity.

The U.S.’s announced pullout from the Paris accord, he noted, did not cause other countries’ resolve to dissolve as some expected. The U.S., the lone holdout since Syria announced its intention to join this week, will likely rejoin at some point in the future, he said.

He noted companies working in the U.K. and Scandinavia are advancing the technology for EGS, which requires ultra-deep drilling through hard rock and fracturing between wells to create pathways for liquid or gas to be circulated through the reservoir — technologies for which Canada has world-leading expertise.

He suggested a Manhattan project type effort to drive the commercialization of the technology, which holds enormous potential. An MIT report estimated EGS could extract 2,000 times the annual U.S. consumption of primary energy with existing technology, and 10 times that with advances in technology.

“It is the one technology that just seems to check all the boxes. It’s got the power density, doesn’t take lots of space on the surface and it is near zero emissions. My only explanation for why we aren’t moving fast on this is that we have such substantial sunk costs with fossil energy sources,” he said. “There is no reason why we shouldn’t be world leaders in this technology.”