Blocking the Sky to Save the Earth 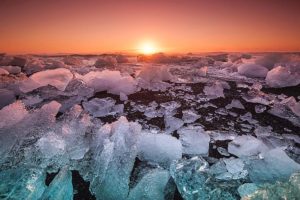 To the relief of climate scientists around the world, it appears that the polar ice cap hasn’t shrunk as much this summer as it did last summer.

The ice cap usually reaches its smallest extent around now, and although the total area of ice in September fluctuates from year to year, in the last two decades it has generally declined, probably because of carbon-driven global warming. Last year, the ice cap shrank at a record-breaking pace; at its minimum it was almost 39 percent smaller than the average from 1979 to 2000. This year it’s down about 33 percent.

A couple of years’ rapid melting may be a random event. But the ice loss of recent years puts the Arctic melt decades ahead of model predictions, raising concern that climate change is proving worse than expected.

We should also worry about the consequences of a decline in sea ice. As the Arctic Ocean loses sunlight-reflecting ice and gains sunlight-absorbing open water, energy circulation across the northern half of the planet could also shift, altering jet streams, storm tracks, rainfall patterns and food production much farther south. The loss of sea ice will probably cause faster melting of the Greenland ice cap and thus a faster rise in sea levels.

How should we respond? First, we must recognize that uncertainty and inertia are inescapable features of the climate system. For instance, we know that warming will melt Arctic permafrost, which, when it rots and releases carbon, causes more warming — but how bad will this cycle be? How much of the extra carbon will be absorbed by plants that grow faster in a carbon-rich atmosphere? Inertia refers to the long lags in the climate’s response to human carbon emissions.

Systems with lots of uncertainty and inertia are notoriously hard to control: we can’t effectively predict their future behavior, and we can’t quickly correct behavior we don’t like. By the time we find out that the climate dice have rolled against us, inertia could make conventional responses like carbon taxes and wind power inadequate. Planning our response around what we currently think is the most likely outcome is therefore reckless. We must hope for the best while laying plans to navigate the worst.

Navigating the worst could involve what scientists call geo-engineering — the intentional modification of the earth’s climate. Unfortunately, although specialist circles and blogs are alive with heated conversations about geo-engineering, the idea is so taboo that governments have provided virtually no research money. Most of these conversations focus on the idea of injecting sulfate particles into the stratosphere to screen out the sun’s radiation, as happens when volcanoes erupt. Also, most of the limited scientific research on geo-engineering has aimed to show why sulfate injections won’t work — like why they might damage the ozone layer or produce too much cooling and drying in places where we don’t want these changes.

Yes, it’s vital to have this “red team” of skeptics questioning geo-engineering. But we need more emphasis on a “blue team” to figure out what geo-engineering approaches might work, because we might need to move fast. Instead of replicating volcanoes, we might use synthetic particles made from metals or ceramics designed to scatter sunlight selectively or that exploit the physics that governs the motion of small particles in the upper atmosphere so that cooling is focused at the poles where it’s needed most.

Of course, flooding the atmosphere with man-made particles poses real risks. So to reduce the uncertainty surrounding geo-engineering, research should include real-world tests of various technologies that poke the climate system just a little. At first, tests might use existing research aircraft like NASA’s ER-2, a heavy version of the U-2, to release small payloads of particles and then measure the effects on solar radiation and the ozone layer. If these early tests showed the risks were low, enough material could then be released to have a detectable climate impact, while still keeping the amount substantially less than that needed to offset all human-driven global warming.

For the second stage of tests, we might use high-altitude aircraft to deliver a larger quantity of particles at about 65,000 feet in the tropics, which would then be carried much higher and toward the poles by the natural overturning circulation in the stratosphere. The reduction in climate risk from even a small-scale sun-shading scheme could easily be larger than the increase in risk from the scheme’s possible side effects. And in any case the effort would cost only a tiny fraction of the expense of meaningful efforts to reduce man’s carbon emissions.

The important thing is to get scientists, environmentalists and global-warming skeptics alike out of the nonsensical all-or-nothing dichotomy that characterizes much current thinking about geo-engineering — that we either do it full scale, or we don’t do it at all. While we should all hope that we never need to play God with the earth’s climate, we must also have the best science at hand to do what might be necessary if melting polar ice leads to a far more dangerous future.

Thomas Homer-Dixon is a professor of global systems at the Balsillie School of International Affairs in Waterloo, Canada. David Keith is the director of the Energy and Environmental Systems Group at the University of Calgary.