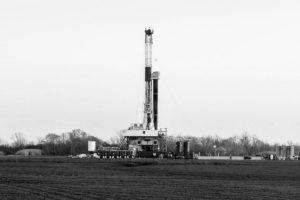 In a recent optimistic analysis, the US Energy Information Administration says drillers are learning how to put holes in the ground faster and release more oil from each hole; rig productivity in the Bakken field has quadrupled since 2007. But a close look at the data suggests that the EIA exaggerates the trend: rig productivity has actually varied wildly, and it may have been higher in 2009. Also, output from wells over a month old is declining 6.3 percent each month, for an annual rate of 53 percent.

The data sheet provides monthly data on Bakken shale oil production (in barrels per day) from January 2007 to October 2013.

Column E shows the EIA’s estimate of legacy production change, which is the decline in Bakken’s average daily production (in barrels) during the previous month of all wells more than a month old. Column G shows the EIA’s data on the field’s total production averaged for each month, in barrels per day.

In the second sheet of the spreadsheet, I generated a chart showing the change in this percentage against time. I fitted a curve to the trend line. The R-squared is remarkably high, which suggests that the rising trend will likely continue in coming years. Extrapolation of the curve suggests it will cross 7 percent about 3 years from now.

One can use an exponential decay calculator, like that at the link below, to calculate the annual decline rate from the monthly decline rate.

If one sets the initial amount in the calculator to 100, the decay rate to 0.063 (the most recent monthly decline rate), and the time to 12 (for the number of months in a year), the calculator produces a “final amount” of 46.95. This implies that the total annual decline rate is currently about 53 percent, not the widely reported 40+ percent rate. I cite the 53 percent figure in the Globe and Mail article.

Returning to the data sheet, in column H I calculate new production (NP). Oddly, the EIA does not provide these data, although they’re easy to extract. Any given month’s total production figure, if it’s larger than the previous month, must include enough new production to cover the month’s legacy decline and the incremental increase in total production from the previous month. This is exactly what the EIA does on page three of the Drilling Productivity Report (DPR), left side, third component from the top (“indicated Change in Oil Production”).

Using the new production data, I calculate the percentage of new production needed to cover the legacy decline. These figures are listed in column K and charted against time on the third sheet. The data points jump around, and the trend isn’t clear, although there’s a slight increase over time. Note that Lynn Westfall, EIA’s director of energy markets, acknowledges the 70 percent figure (for recent months, see the numbers at the bottom of column K) in the interview here, as cited in the Globe article.

One can also use the new production data to estimate rig productivity by dividing new production (column H) by monthly rig count (column B). The EIA provides its own estimate of monthly rig productivity in column C. I provide my estimate, using the above method of calculation, in column D. I believe I’m doing this calculation correctly, because my estimate of 496 barrels per day per rig for December 2013 corresponds very closely to the 497 figure the EIA provides at the top of the third page of the DPR.

Here’s where things get interesting. Sheet four in the spreadsheet shows a scatterplot of the EIA’s monthly estimates of rig productivity (column C in the data spreadsheet). It matches exactly the curve the EIA presents in the top left component (“New-well oil production per rig”) of the third page of the DPR.

The fifth sheet of the spreadsheet shows the trend line using my figures (column D). I’ve included a ten-year smoothed average. We can see roughly the same curve as the EIA’s, but again the data points are all over the place—and there’s at least one period of time (mid-2009) when rig productivity appears to have been as high as—or higher than—it is now.

What is going on? The first clue to an answer, I believe, is that the EIA’s legacy decline rate data (column E) are suspiciously linear. If one plots the monthly data points for legacy decline for the last two years against time, the line is dead straight, which indicates the data were produced using some kind of interpolation method. The second clue is that the 6.3 percent monthly decline rate (53 percent annual rate) is astonishingly high in light of other industry estimates, as I indicated in the Globe article.

So, the EIA appears to be estimating monthly decline rates and using very high estimates at that.

One final point: the EIA’s rig productivity trend line (in the DPR and on sheet four of the spreadsheet) is suspiciously smooth. It does, though, closely resemble the ten year moving average that I obtained through my calculations (on sheet five). This suggests that the very precise figures that the EIA provides for rig productivity (in column C of the data spreadsheet) have been obtained by fitting a smooth curve to something like a ten-year moving average and then reading the rig productivity figures from the smooth curve.

If this is indeed the case, I’ll let others judge the integrity of the EIA’s exercise.