Everything is not Peachy 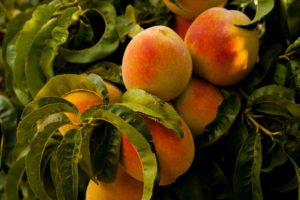 Globe and Mail, August 18, 2008
by Thomas Homer-Dixon and Sarah Wolfe

Our baby was fussing for her next feeding, and our pre-schooler was turning somersaults on the couch as he negotiated for the next episode of Sesame Street. Meanwhile, we were up to our elbows in hot syrup and peeled peaches – and we still had another fifteen pints of the little devils to go.

Canning our own peaches seemed like a terrific idea at first. We’d been talking about household self-sufficiency for years. We love Ontario peaches, and they were coming into season. And we’d even bounced the idea off our parents. During their recent visit, the conversation had turned to higher fuel prices and how they’d make locally produced food more competitive with imported food. So we announced our plan.

It was not received with overwhelming enthusiasm.  “Canning fruit – especially peaches – is a lot of work,” they explained gently. “Do you know how it’s done?”  “Oh, that’s OK,” we declared, “we’ll find instructions on the Web.”

During the same visit, we also heard about some of our parents’ friends. Jean and Rusty Smith are fruit and vegetable farmers in Cedar Springs, near Chatham, Ontario. They have 250 acres under cultivation.  For the past forty years, the Smiths have grown everything from onions and tomatoes to cabbages and cauliflower. They also have a large orchard of peach trees. But this year they had nowhere in Ontario to send their fruit. The canning plant in the Niagara region they’d used for years – the last commercial fruit canning facility east of the Rockies – closed this June.

Self-sufficiency isn’t a sexy idea. At best, people who say they’re interested in being self-sufficient are stereotyped as dour, old-fashioned rural-types. At worst, they’re seen as fanatical survivalists planning for an apocalypse. Economists also tell us that self-sufficiency is an anachronism.  Instead, it’s specialization that produces wealth, and economies – including the world economy – produce the most wealth when everyone, including countries, specializes in what they do best and then trades their products for the other things they need. The more specialization, the more connectivity among specialists, and the more trade along those connections, the better.

But there are problems with this model. As we specialize we become more dependent on other people, industries, and regions in the global economy. That may be fine for non-essential goods like children’s toys and kitchen appliances, but should we depend on others for life’s essentials like food?  Also, specialization at the global level tends to reduce the diversity of producers and products – a small number of large, highly efficient producers often comes to dominate the market for specific goods. In complex systems from economies to ecologies, however, lower diversity usually means lower ability to adapt to rapidly changing circumstances. And, finally, all that connectivity among specialized producers around the world makes everyone more vulnerable to cascading system failures:  a shock or failure in one part of the global system can propagate through the rest of the system in the blink of an eye, like a row of falling dominoes.

Taken to an extreme, the dominant economic model of specialization, connectivity, and trade reduces the resilience of our communities and societies – our ability to take care of ourselves in volatile times.

In the case of the Niagara fruit canning plant, the former owner, CanGro Foods, is a subsidiary of two giant multinational private equity firms specializing in leveraged buyouts. Such firms, by the very nature, have little interest in the well-being of specific regions or local communities, including their resilience. They’re interested in maximizing profit. Fruit processing is not an industry with rip-roaring returns, partly because consumers’ tastes are shifting to fresh fruit. So even though the Niagara plant was making money, CanGro wanted out. A last-minute attempt to save the plant, involving negotiations among CanGro, the province, and two possible local buyers, fell through – with finger pointing in every direction.

Now two thousand acres of peach and pear orchards in the Niagara and adjoining regions are at risk of being torn out of the ground, while hundreds of people are out of work. And Ontario’s canned peaches will come from China.

Sadly, if CanGro had only held on for a few years, the Niagara plant would likely have become much more profitable. The globalization of our food-production system is probably near its apogee. As energy prices rise because of scarcer oil and carbon taxes on fossil fuels, shipping food from the other side of the planet, or even from the other side of the continent, will become steadily more expensive, while locally and regionally produced food becomes steadily more competitive, even with higher local labour and processing costs.

No return to root veggies

Someday, perhaps not too far in the future, 747s loaded with fruit from overseas will stop landing at Pearson airport. The steady stream of tractor-trailers from Florida and California that brings orange juice and lettuce to Ontario tables will dwindle to a trickle. So Ontario needs to prepare to grow and process much more of food it consumes. We don’t have to return to root vegetables in winter:  using new technologies, we can have a varied and nutritious diet all year long.

Thomas Homer-Dixon holds the CIGI Chair in Global Systems at the Balsillie School of International Affairs in Waterloo and is a professor in the Centre for Environment and Business at the University of Waterloo.  Sarah Wolfe is an Assistant Professor in the Department of Environment and Resource Studies at the University of Waterloo.