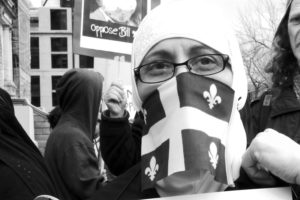 By pressing the niqab issue, the Conservatives made an enormous strategic mistake. In fact, it was probably the single biggest blunder by any political party in this extraordinary election season. With one political gambit, they destroyed any hope of retaining power and handed the election to the Liberals. But the reasons why the move was such a blunder aren’t yet widely understood.

At least 10 per cent (and maybe closer to 20 per cent) of the country’s electorate detests the Harper government with passion. These Anybody-But-Harper or “ABH” voters number maybe two million or more people, spread across the country. They’re prepared to vote for either of the two main alternative parties – the NDP or the Liberals – if it means the Conservatives lose office.

That sounds like a huge group with potentially huge electoral power. But these people face a co-ordination problem, in game-theory terminology. They can only realize their power if they act more or less together, at least at the riding level but ideally nationally. In response to this co-ordination problem, groups promoting strategic-voting plans have proliferated.

The ABH voters have been watching each other’s potential behaviour, through opinion polls, looking for a signal as to which horse to back – the Liberals or the NDP. To have any hope of winning the election, the Conservatives had to keep the ABH vote split roughly evenly between the two opposition parties. They needed to ensure that neither the NDP nor Liberals broke out ahead. All of the above is widely understood.

What’s not understood is that the Conservatives themselves provided the break-out signal to the ABH vote. By pressing the niqab issue, starting in mid-September, they helped cause a sharp downturn in already soft NDP support in Quebec. (Anti-niqab sentiments are strong in the province, yet NDP Leader Thomas Mulcair has defended the right of women to wear the dress in citizenship ceremonies.)

As soon as the NDP poll numbers turned south in Quebec, the probability that the NDP would win enough seats to form the government dropped precipitously, given the importance of the NDP’s Quebec caucus to the party’s election hopes.

This was a signal to the ABH vote across the country to shift to the Liberals. ABH opinion leaders immediately recognized the implications of the Quebec developments; it took about another two weeks for those implications to be communicated through the ABH crowd and felt strongly in the polls, especially in Ontario. The Liberal Leader, Justin Trudeau, helped the shift by performing well on the stump and in debates.

Nationally, from the third week of September on, the Liberal surge in the Nanos daily tracking poll was almost an exact mirror image of the NDP’s decline, clear evidence that the ABH vote tipped to the Liberals during this period.

From a game-theoretic point of view, this is extraordinarily interesting behavior. It’s very rare to see a real-time co-ordination problem solved so fast by millions of people. It’s a remarkable example of collective or “emergent” group intelligence – one that I expect will receive a lot of attention from scholars in the future.

There’s a deep irony here: it was the very receptivity of a portion of the Canadian population, in Quebec, to the Conservatives’ divisive strategy on the niqab that ultimately generated the signal that progressive ABH voters elsewhere in the country needed to coordinate their behaviour – and that has proved the Conservatives’ undoing.

Read article in the Globe and Mail