How Alberta could champion a new energy source 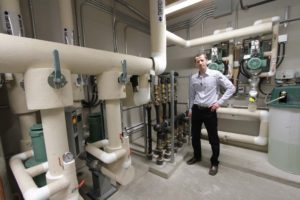 Albertans may well wonder if a plague of locusts will come next. From the 2013 floods, to the oil price collapse and the resulting fiscal crisis, to the Fort McMurray fires, the province has taken some heavy blows. So has the country as a whole, because Alberta’s economy is integral to the national economy and its people are vital members of the Canadian family.

Many hope things will return to the way they were before, when oil prices hovered around $90 a barrel, Alberta’s economy was roaring, and provincial coffers were full. Alberta’s prosperity is irrevocably tied to the extraction of bitumen to produce oil, this thinking goes, so the province must wait for oil prices to bounce back. Because the world will need huge amounts of oil for decades to come, Alberta’s oil patch will roar again before too long.

But things won’t return to the way they were. In transportation energy, which is what oil mainly provides, three trends in energy fundamentals are key.

First, as the most-easily extracted oil reserves have been exploited, decade over decade, the amount of energy used to get a new barrel from the ground has steadily increased, raising the floor cost of that marginal barrel. Turning bitumen into oil is an energy-hungry process.

Second, climate change is getting worse. Government, corporate, and investor decisions are increasingly accounting for the cost of global warming; carbon pricing, whether open or hidden, is spreading around the world.

The first two trends raise oil’s floor price, currently depressed by weak global growth, while the third lowers the price of alternatives. Much sooner than many analysts acknowledge, these trends will flip the economics of oil on its head. In 15 years, oil could easily seem like yesterday’s transport fuel. The first oil to be removed from the market will be the most expensive and carbon-intensive, such as the stuff we make from bitumen.

So what’s our Plan B? There’s no simple answer. Alberta will be forced to diversify its economy in many directions. But investment in research and development of one particular technology – enhanced geothermal systems (EGS) – could help fill the economic gap left by declining fossil-fuel extraction.

EGS taps the heat radiating from the planet’s core. Wells spaced several hundred meters apart are drilled three kilometres, far below the water table. The rock between the wells is fractured, and a liquid or gas is pumped through the cracks to absorb heat from the rock. The hot material is pumped to the surface, where it’s used to provide heating or drive electrical turbines.

The energy potential around the world is vast. In 2006, an MIT report estimated that then-available technologies could extract from rock beneath the lower-48 states more than 2,000 times the annual U.S. consumption of primary energy. With advances in technology, the report said, “the economically extractable amount of useful energy could increase by a factor of 10 or more, thus making EGS sustainable for centuries.” EGS could provide continuous base-load power with “virtually no emissions, including carbon dioxide.”

As with any new technology, there are challenges. Most experimental wells have been drilled where hot rock is relatively close to the surface, but these zones are often seismically active, so the injection of fluid has sometimes caused earthquakes. Drilling in less-active zones away from population centres requires going deeper, perhaps through igneous rock that is far harder than the sedimentary rock penetrated in conventional oil wells. Also, keeping the heat exchangers from gumming up with dissolved material brought to the surface is difficult.

But these are engineering challenges. Strada Energy, a British company, recently used a percussion drill to bore 20 metres an hour through granite. This advance should make feasible wells that reach down eight to 10 km, where temperatures are likely to be above the 150-degree threshold needed to generate electricity.

Enhanced geothermal technology could eventually succeed the renewables that are being deployed today. Unlike wind turbines and photovoltaic panels, it can provide continuous power without energy storage, with a small footprint on Earth’s surface for each kilowatt generated.

But best of all, it’s a technology that Canada, and especially Alberta, can help to pioneer and bring to scale. Alberta’s oil companies are already fabulously good at drilling holes in the ground. The province and Canada have exactly the right mix of engineering, drilling, and geotechnical expertise to be EGS leaders and to sell the technology around the world.