How Climate Change’s Effect on Agriculture can Lead to War 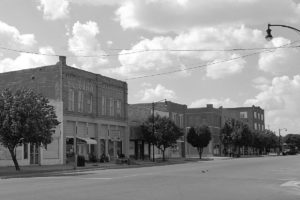 On February 12, the temperature in Magnum, Oklahoma, reached 100 degrees. It was a state record for the month of February, besting a mark that was set in 1918. The average February high in Magnum is 56.

Many see the unseasonably warm temperature as yet another undeniable sign of climate change, but it won’t likely be heeded by Oklahoma Senator James Inhofe, who famously brandished a snowball on the Senate floor in 2015 in an effort to prove that climate change was not real. Inhofe’s views have been echoed by the current president of the United States, Donald Trump, who famously tweeted in 2012 that climate change is a hoax perpetrated by the Chinese to “make U.S. manufacturing non-competitive.” Trump’s pick to lead the Environmental Protection Agency, Oklahoma Attorney General Scott Pruit, is a known climate change denier who has written that the debate surrounding the “extent of global warming” is “far from settled.”

Most of the rest of the world isn’t so cavalier in dismissing what many see as the 21st century’s greatest threat to humanity. At this week’s World Government Summit in Dubai, the subject of climate change had a prominent place in discussions led by the world’s preeminent scientists, professors, business leaders and heads of state. In particular focus was the effect climate change could have on the world’s food supply, which most agree will be catastrophic if both the public and private sectors don’t do enough to combat rising temperatures.

“The implications are enormous,” said Dr. Thomas Homer-Dixon of the Waterloo Institute for Complexity and Innovation. “It affects every aspect of the global food supply around the planet.”

Much of the concern is over temperatures exceeding the scope of what modern agriculture was developed to withstand. “It’s going to be radically different from what we’ve seen before,” Homer-Dixon explained. “The variation in temperature has been within .75 degrees over a period of almost 1,500 years, and this century we’re moving far outside of this envelope in which human beings laid down their industrial infrastructure, their agricultural systems, their irrigation systems, their road networks and their ports.”

Homer-Dixon pointed out that “the hottest seasons on record will represent the future norm.” According to a 2009 study titled “Historical warnings of future food insecurity with unprecedented seasonal heat,” there is a more than 70 percent chance that any given summer in the years 2080-2100 will be the hottest on record in the vast majority of the United States. That number is more than 90 percent for the South, the East Coast, the Southwest and parts of California. “We have developed our crops to grow with certain levels of heat stress, and we’re moving into a radically different world now,” said Homer-Dixon.

The effects of climate change on agriculture extend far beyond the global food supply. Homer-Dixon is a pioneer of the idea that climate change can lead to violent conflict. In 1994, he published a study titled, “Environmental Scarcities and Violent Conflict: Evidence from Cases.” The most recent example, Homer-Dixon explained, is the Syrian Civil War.

“We’re finding that [climate change] a powerful factor in a number of cases [of violent conflict]. Often, the links are directly through food supply. One case that has been examined quite a bit—there is some controversy around this but I think it’s quite clear—is the Syrian Civil War. You had a serious drought in the eastern Mediterranean in the years 2008 to 2010 or so, which produced an enormous impact on food systems and agricultural systems in the northern part of the country, which resulted in a flood of about 1-1.5 million people into urban areas in Syria. The people who weren’t able to be absorbed by these economies, given the other factors and stresses within the country, could have contributed to a tipping of the society. Many of the cities who received the most migrants are where we saw the first revolts against the Assad regime.

“It’s an example of the kind of thing we could see in the future,” Homer-Dixon concluded. “It’s important to note that there are spillover effects. This conflict didn’t remain isolated in that part of the world. It’s had consequences for geopolitics around the planet. That’s an indication of the kind of instability we could see later this century.”