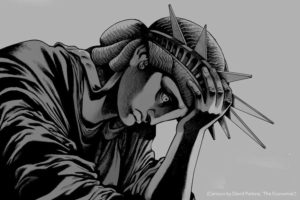 During the election campaign, Donald Trump made the normalization of abnormality a signature political tactic. The more he violated the conventions of U.S. political life, democratic practice and civil discourse, the more he excited his followers. He deliberately turned himself into their wrecking ball – a device they could use to smash the dominant political, economic and cultural system and the “elites” they believed ran it.

But now that he’s won, this tactic won’t work any more. It will just cause bedlam. So, can Mr. Trump better align his behaviour with the political and management requirements of the presidency? Probably not.

He is like a bizarre hybrid of an idiot savant and a Mafia don. He can’t organize his staff to properly co-ordinate phone calls with foreign leaders, but he’s scarily brilliant when it comes to understanding and manipulating a crowd’s emotions, especially its anger and fear.

He can sense people’s deepest insecurities and then create easily grasped narratives that exploit these insecurities to mobilize people in his favour. He’s also paranoid, petulant and highly authoritarian. So he’s vindictive toward anyone who crosses or belittles him; and he values personal loyalty in his associates far more than competence or intellectual independence, which is why his closest advisers are family members or extremists who didn’t desert him during the campaign.

These aren’t characteristics most would regard as ideal in a U.S. president. But there’s more. Cognitively, Mr. Trump sees the world in terms of dichotomies: winners/losers, rich/poor, powerful/weak, friends/enemies. He also has an extraordinarily simplistic view of causation. For any particular problem he rails against, he identifies a sole cause and then personifies it in a particular individual or group – a scapegoat. His followers, of course, eat this stuff up, because it simplifies a bewildering world and identifies the bad guys they should attack. It’s classic demagoguery.

When Mr. Trump drives this particular clunker of talents, personality features and cognitive styles into the Oval Office, the wheels are likely to fall off. It seems he can’t think about complex problems in a focused and nuanced way; instead, he seizes on simple and decisive answers that produce an immediate hit of adulation from his followers.

But in today’s globalized hyperconnected world, every problem has multiple causes. Even small decisions can generate cascades of large unintended consequences and many events of political import – banking crises, cyberattacks, the spread of new infectious diseases or the flight of a ballistic missile – happen faster than managers, policy makers and institutions can effectively respond. Worse, these events happen in a hysterical social-media echo chamber that pumps up ideological extremism by instantaneously amplifying emotions and propagating lies.

So, the biggest danger isn’t that Mr. Trump, as president, will successfully implement hard-right policies by deporting millions of illegal immigrants, shredding trade and climate agreements, or even turning U.S. foreign policy sharply isolationist. The biggest danger is that he’ll repeatedly misjudge the situation he’s facing, make bad mistakes in response and then stubbornly double down on those mistakes – ultimately producing outcomes such as race riots, financial panics or war.

Some of the best but least-noticed commentary since the election has focused on how ill-equipped Mr. Trump is – temperamentally and intellectually – to deal with the day-to-day business of politics and decision-making in the modern White House. Every day, to succeed as president, he’ll have to stroke countless egos, strategically navigate through a constantly shifting terrain of political bargaining, decide how to balance critical values and make the final call on intricate details of policy when his advisers are deadlocked.

To do these things, he’ll need to deliberate deeply and quickly, switch smoothly from one issue to another and sometimes recognize he’s wrong, all while keeping his emotions in check.

Everything we’ve seen so far indicates Mr. Trump can’t do these things. And the relatives and hard-liners he’s appointing as advisers and nominating as core cabinet members won’t compensate adequately for his deficits either; they might even reinforce his worst tendencies.

Read Article in Globe and Mail