Start the Leap revolution without me 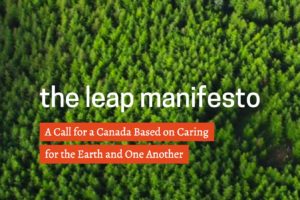 The Leap Manifesto is a Rorschach ink-blot test of one’s political and economic ideology. To take the test, just read the document’s first four sentences:

“We start from the premise that Canada is facing the deepest crisis in recent memory. The Truth and Reconciliation Commission has acknowledged shocking details about the violence of Canada’s near past. Deepening poverty and inequality are a scar on the country’s present. And our record on climate change is a crime against humanity’s future.”

A minority of Canadians will nod their heads in excited agreement. To them, everything in these words makes complete sense. A different minority will be incensed, because one or more sentences will challenge their deeply held beliefs.

A majority of readers, though, will be bewildered. “Whoa,” they’ll think, “Canada is facing its deepest crisis in memory? Really? And how can one possibly lump together Canada’s treatment of its indigenous population, its poverty and inequality, and global climate change as causes of this supposed crisis?”

Bewilderment will deepen as these folks read the rest of the document. It includes declarations supporting indigenous rights, high-speed rail, local agriculture, greater openness to refugees, a national child-care program and a universal basic income, along with condemnations of fossil-fuel subsidies, government austerity, racial and gender inequality and international trade deals.

The puzzle vanishes, though, once one recognizes that the manifesto is anchored to two deep assumptions – one explicit and the other implicit.

The explicit assumption is signalled right in the manifesto’s subtitle: “A call for Canada based on caring for the Earth and one another.” The document’s authors challenge us to expand the scope of our empathy and to act immediately on that expanded scope. Its ideological starting point is, in other words, profoundly communitarian, appealing directly to our cultural impulse to take care of one another that underpins institutions such as Canada’s health care system. But this starting point largely sidelines the individualist, the entrepreneur, or anyone who thinks that society’s health depends on ensuring lots of space for people to exercise their agency and creative possibility. In the Leap Manifesto, altruism trumps selfishness, and “we” subordinates “I.”

The other key assumption is linked to the first, but it’s far more subversive and contentious, which explains why it’s largely implicit: The Canadian economy – structured around commitments to private property and corporate capitalism – is making our society sick, root and branch. It’s also contributing to a global ecological crisis that threatens humanity’s survival. So it must be restructured, urgently, from the ground up.

Once seen in light of these two assumptions, all the manifesto’s disparate declarations and condemnations fit together into one seamless whole. It’s calling for nothing less than revolutionary change in every part of the Canadian economy and society.

Whether one supports the call will depend on whether one believes that revolutions can produce, on balance, positive social change. But it will also depend fundamentally on whether one accepts the two underlying assumptions.

The communitarian assumption is largely a value judgment, a matter of personal preference for improving others’ well-being ahead of one’s own. But that’s not the case for the assumption about the pernicious nature of today’s capitalism. There’s a lot of real-world evidence about capitalism’s benefits and costs, and there’s an important debate to be had about whether capitalism is an essential source of the wealth and innovation needed to save humanity or an economic system that’s inescapably exploitative and destructive.

It’s worth asking, though, if it’s smart to make this debate central to action on climate change. The Leap Manifesto entangles efforts to move forward on climate policy with a host of other matters that are part of a larger ideological agenda. So it’s a profoundly divisive document at the very moment when we need to find common ground on climate change. It has thrown the country’s left into crisis. Worse, it plays directly into the hands of people opposed to aggressive climate policy and who claim the entire issue is a scam to allow a hyper-intrusive state to grab people’s wealth. Oops.