The End of Ingenuity 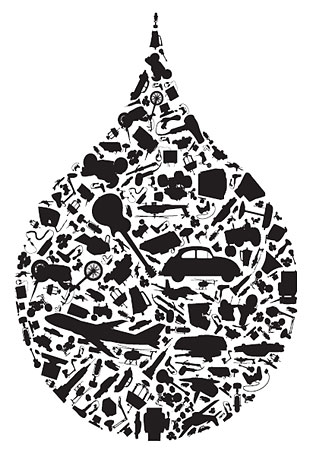 Maybe Malthus was on to something, after all.

First, some background: Twenty-six years ago, in one of the most famous wagers in the history of science, Paul Ehrlich, John Harte and John P. Holdren bet Julian Simon that the prices of five key metals would rise in the next decade. Mr. Ehrlich and his colleagues, all environmental scientists, believed that humankind’s growing population and appetite for natural resources would eventually drive the metals’ costs up. Simon, a professor of business administration, thought that human innovation would drive costs down.

Ten years later, Mr. Ehrlich and his colleagues sent Simon a check for $576.07 – an amount representing the decline in the metals’ prices after accounting for inflation. To many, the bet’s outcome refuted Malthusian arguments that human population growth and resource consumption – and economic growth more generally – would run headlong into the limits of a finite planet. Human inventiveness, stimulated by modern markets, would always trump scarcity.

Indeed, the 1990s seemed to confirm this wisdom. Energy and commodity prices collapsed; ideas (not physical capital or material resources) were the new source of wealth, and local air and water got cleaner – at least in rich countries.

But today, it seems, Mr. Ehrlich and his colleagues may have the last (grim) laugh. The debate about limits to growth is coming back with a vengeance. The world’s supply of cheap energy is tightening, and humankind’s enormous output of greenhouse gases is disrupting the earth’s climate. Together, these two constraints could eventually hobble global economic growth and cap the size of the global economy.

The most important resource to consider in this situation is energy, because it is our economy’s “master resource” – the one ingredient essential for every economic activity. Sure, the price of a barrel of oil has dropped sharply from its peak of $78 last summer, but that’s probably just a fluctuation in a longer upward trend in the cost of oil — and of energy more generally. In any case, the day-to-day price of oil isn’t a particularly good indicator of changes in energy’s underlying cost, because it’s influenced by everything from Middle East politics to fears of hurricanes.

As the average E.R.O.I. of an economy’s energy sources drops toward 1 to 1, an ever-larger fraction of the economy’s wealth must go to finding and producing energy. This means less wealth is left over for everything else that needs to be done, from building houses to moving around information to educating children. The energy return on investment for conventional oil, which provides about 40 percent of the world’s commercial energy and more than 95 percent of America’s transportation energy, has been falling for decades. The trend is most advanced in United States production, where petroleum resources have been exploited the longest and drillers have been forced to look for ever-smaller and ever-deeper pools of oil.

Cutler Cleveland, an energy scientist at Boston University who helped developed the concept of E.R.O.I. two decades ago, calculates that from the early 1970s to today the return on investment of oil and natural gas extraction in the United States fell from about 25 to 1 to about 15 to 1.

This basic trend can be seen around the globe with many energy sources. We’ve most likely already found and tapped the biggest, most accessible and highest-E.R.O.I. oil and gas fields, just as we’ve already exploited the best rivers for hydropower. Now, as we’re extracting new oil and gas in more extreme environments – in deep water far offshore, for example – and as we’re turning to energy alternatives like nuclear power and converting tar sands to gasoline, we’re spending steadily more energy to get energy.

For example, the tar sands of Alberta, likely to be a prime energy source for the United States in the future, have an E.R.O.I. of around 4 to 1, because a huge amount of energy (mainly from natural gas) is needed to convert the sands’ raw bitumen into usable oil.

Having to search farther and longer for our resources isn’t the only new hurdle we face. Climate change could also constrain growth. A steady stream of evidence now indicates that the planet is warming quickly and that the economic impact on agriculture, our built environment, ecosystems and human health could, in time, be very large. For instance, a report prepared for the British government by Sir Nicholas Stern, a former chief economist of the World Bank, calculated that without restraints on greenhouse gas emissions, by 2100 the annual worldwide costs of damage from climate change could reach 20 percent of global economic output.

Humankind’s energy and climate problems are intimately connected. Petroleum’s falling energy return on investment will encourage many economies to burn more coal (which in many parts of the world still has a relatively good E.R.O.I.), but coal emits far more greenhouse-inducing carbon dioxide for every unit of useful energy obtained than other energy sources. Also, many potential solutions to climate change – like moving water to newly arid regions or building dikes and relocating communities along vulnerable coastlines – will require huge amounts of energy.

Without a doubt, mankind can find ways to push back these constraints on global growth with market-driven innovation on energy supply, efficient use of energy and pollution cleanup. But we probably can’t push them back indefinitely, because our species’ capacity to innovate, and to deliver the fruits of that innovation when and where they’re needed, isn’t infinite.

Sometimes even the best scientific minds can’t crack a technical problem quickly (take, for instance, the painfully slow evolution of battery technology in recent decades), sometimes market prices give entrepreneurs poor price signals (gasoline today is still far too cheap to encourage quick innovation in fuel-efficient vehicles) and, most important, sometimes there just isn’t the political will to back the institutional and technological changes needed.

We can see glaring examples of such failures of innovation even in the United States – home to the world’s most dynamic economy. Despite decades of increasingly dire warnings about the risks of dependence on foreign energy, the country now imports two-thirds of its oil; and during the last 20 years, despite increasingly clear scientific evidence regarding the dangers of climate change, the country’s output of carbon dioxide has increased by a fifth.

As the price of energy rises and as the planet gets hotter, we need significantly higher investment in innovation throughout society, from governments and corporations to universities. Perhaps the most urgent step, if humankind is going to return to coal as its major energy source, is to figure out ways of safely disposing of coal’s harmful carbon dioxide – probably underground.

But in the larger sense, we really need to start thinking hard about how our societies – especially those that are already very rich – can maintain their social and political stability, and satisfy the aspirations of their citizens, when we can no longer count on endless economic growth.

Thomas Homer-Dixon, director of the Trudeau Center for Peace and Conflict Studies at the University of Toronto, is the author of “The Upside of Down: Catastrophe, Creativity and the Renewal of Civilization.”