The Enticements of Green Carrots

We Canadians like to think we are green, but when it comes to protecting the environment, we are among the world’s worst actors. Whether the metric is carbon output per capita, toxic waste emissions or protection of endangered species, Canada regularly ranks near the bottom of the list of similarly wealthy countries.

If our economy’s incentives start pulling in the same direction as our ethical impulses, Canadians can do better. At present, they are pulling in opposite directions.

Most of us feel at least a twinge of an ethical obligation to take care of our natural environment. We know in some general way that the goods and services nature provides – clean air, regular rainfall, pollination of crops and the like – are essential to our health and prosperity. Most of us also feel some moral responsibility to protect these vital resources for our children and grandchildren.

But doing so generally doesn’t pay. Despite a patchwork of provincial and federal subsidies, when we do insulate our homes, buy fuel-efficient cars or install energy-saving appliances, we usually bear a high upfront cost, gaining any savings in small increments over many years. For most of us, money in the hand seems to be worth a lot more than the prospect of savings some time in the future. So although we feel we should do our bit, the changes we actually make are slight.

Conventional economists say the underlying problem is that nature’s goods and services are too cheap. Partly because these goods and services cannot be easily sliced into pieces and bought and sold in a marketplace – because we can’t apply property rights to them – the economy treats them as essentially free. Following conventional economists’ advice, the standard response of politicians and policy-makers is to make nature’s goods and services more costly. For instance, cap-and-trade policies for dealing with climate change essentially propose to slice into pieces the atmosphere’s capacity to absorb carbon dioxide, and then have the pieces priced in a market.

Such policies have a flaw; they tend to emphasize sticks (higher costs) rather than carrots (things we want). And while sticks may get us to change our behaviour, we don’t change with any enthusiasm, which means our changes are often less extensive and creative than they could be.

Conventional economists are right in their diagnosis – that nature’s goods and services are too cheap – but sometimes off the mark with their prescriptions. On the other hand, behavioural economists, who study how people behave in response to various incentives, can give us insights into what will work better. They have found that people generally respond more readily to carrots than sticks, that they tend to avoid risk, and that they act faster when they have easy access to clear information about how their behaviour compares with others’. 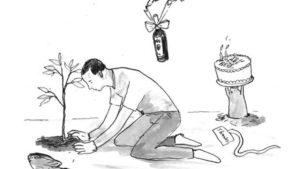 Illustration by Graham Roumieu for The Globe and Mail

A former student of mine recently put these insights to use on the job.

Working in a federal ministry in Ottawa, she was bothered by the casual, everyday inefficiencies and waste in her co-workers’ office practices – such as copying documents on only one side and leaving unused computers and other equipment running for long stretches. So, being an activist at heart, she decided to try to change these behaviours. She went around to her co-workers and asked them individually to volunteer to have their office practices monitored, rated and publicly advertised. A colour-coded badge was then posted outside each volunteer’s office, indicating that person’s progress in reducing his or her environmental impact.

The result was dramatic. A friendly competition developed to see who could do the best. Doing well became a matter of pride and reputation, and new norms started to take root.

Most importantly, participants’ use of resources like paper and energy and their output of waste dropped sharply.

Nudging people to change their behaviour in an office building is one thing. Getting a whole country to change is quite another. But some people are developing the ideas needed to make it happen. One is Ron Dembo, founder and CEO of Zerofootprint, a Toronto-based, not-for-profit organization that helps people, corporations, cities and whole societies reduce their environmental impact.

Mr. Dembo is among a handful of Canadians (Greg Kiessling, founder of Bullfrog Power, and Stewart Elgie, head of Sustainable Prosperity, are others) applying extraordinary creativity and entrepreneurial skill to make modern capitalism work to save the environment rather than destroy it. A mathematics genius, Mr. Dembo began his career in computational finance, taught computer science and management for a decade at Yale and founded a company marketing risk-management software to leading banks around the world. He sold his company well before the risk-management fiasco that led to the current economic crisis – a crisis that arose from practices he decries – and then invested much of his fortune in Zerofootprint.

Mr. Dembo is tall, slim and athletic – an intense fifty-something social entrepreneur bursting with inspiration about how to use new technologies and incentives to save the environment. Among his best ideas, and one that he has developed in great detail, is “green credits.”

Green credits would be very similar to frequent-flyer miles.

Participation in the program would be voluntary. People could accumulate their credits over time and use them to get things they want. But unlike frequent-flyer points, people would earn their green credits by reducing their environmental impact, not by increasing it. Buying an energy-saving appliance or a fuel-efficient car, turning lights off, driving less, installing insulation, turning down the thermostat in the winter or reducing household water use would earn us points.

A green credits system would probably be most successful and comprehensive if governments set up the basic infrastructure of monitoring, information exchange, accounting, and financing. In this case, credits could be redeemed annually for cash or for a reduction of gross taxable income (at the rate of, say, one credit per taxable dollar). Governments would establish how many credits a given action, like buying a high-efficiency clothes dryer, would earn, perhaps by tying the total number of credits issued to the achievement of policy goals, such as national carbon-emission targets. The system could be financed from the savings it produced in infrastructure spending; for instance, lower electricity consumption would mean the government wouldn’t have to spend so much on revamping and expanding the electricity grid. An even better arrangement might be to finance the credits from revenues generated through a carbon tax or cap-and-trade system that is applied only to large emitters, like smelters, cement plants and tar-sands oil producers.

What Your Dryer has to Say

But the private sector could also set up, run and finance a green credits system. It might operate something like this: The manufacturer of an appliance such as a high-efficiency clothes dryer would entice buyers by attaching a certain number of credits to any sale. As well, each machine would be fitted with a computer chip allowing it to communicate back to the manufacturer data about its use and performance through new “smart” wall plugs that talk to the Internet. The manufacturer would gain in two ways: by selling one of its dryers and by receiving a stream of real-time data on where, when and how its machine is being used – data that would be invaluable for further product development. The buyer would get credits that could be applied to the purchase of green goods and services from a designated list accepted by all participating firms.

The data on the dryer’s use – hours of operation per week, temperature settings and the like – could also be combined with data from similar dryers in use across a population to create average-use statistics. Users who beat the average by a certain amount would be awarded additional credits.

The best arrangement would be a public-private partnership where both government and firms co-operate to create the pool of credits.

Eventually the credits could be traded in a market. “Such a market would encourage those who are able to make the easiest and most economical reductions to move quickly,” Mr. Dembo writes, “and it would reward those who are most active in taking green actions.”

The system would gather, communicate and interpret data to provide a fine-grained and constantly updated picture of people’s behaviour affecting the environment. Such data make it possible to reward beneficial behaviour.

Some people may think this all sounds very Orwellian. Our machines would be constantly reporting on us. Participants would also have to agree to release information on such things as their household energy and water consumption, so that they could be issued credits if their consumption declines over time. But this is an opt-in program. No one would be coerced to join. And the information provided would be vastly less personal and revealing than the private details many people casually release daily in their blogs and Facebook profiles.

The bottom line is this: Mr. Dembo’s green credits idea is exciting and worth exploring in detail. We should probably take it for a test run somewhere in Canada; a system along these lines might eventually revolutionize the Canadian economy. But it is only one idea. Once we put our heads together, we’ll probably come up with countless ways to encourage green behaviour by aligning what we want to do ethically with what it pays us to do economically. There is no reason for Canada to be at the back of the pack. We should be at the front.