We’re Losing Our Past to Technology 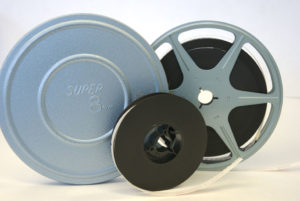 A few weeks ago, as I was rummaging in a drawer in my father’s house, I came across a dozen reels of developed 8-millimetre film. I’d known the reels were in the house somewhere. But, for many years, I’d resolutely put the fact out of my mind. The films contained clips of my family in the late 1950s and early 1960s, not long before my mother became gravely ill. Over the intervening decades, I hadn’t had the heart to look at them.

But, this time, I packed the films into a shoebox and took them to someone who specializes in converting old films into digital form. Within a week, I had all the clips on a DVD and was showing them to my wife and two young children. There I was – three years old – with my mother and father playing on the swing set outside my childhood home near Victoria, learning to swim with my mother, hunting for Easter eggs with her in the field and forest nearby.

It was one of the first occasions that my children had seen images of their grandmother, and the first time I’d seen anything other than a still picture of her since I was 13. Even without sound, the emotional impact was inexpressible. It was as if I’d stepped into a time-travel machine and shot more than 50 years into the past.

We all want to capture happy family moments so we can relive them again in later years. But half a century is a really long time. Will any of today’s family digital recordings last that long? Will today’s children be able to see videos of themselves taken now in, say, 2070? These holidays, as we reach for the digital camera or video recorder, we assume they will – but we’re probably wrong.

I love technology just as much as the next person, but we have a real problem here. Today’s information technology is creating what we might call an Age of Ephemera. Our unprecedented ability to store and transfer gargantuan amounts of information obscures this information’s modern fragility.

Two factors are at play. The first is what people in the business call “media decay.” The physical material we use to store our information changes over time. Some materials deteriorate very slowly: Acid-free paper can last for 500 years, and the lifespan of archival-quality microfilm is about 200 years. But the kind of recordable CD on which most of us store our family photos can be unreadable in as few as five years, because the dyes in the CD’s recording layer fade, especially if the disk is stored in light.

The second and ultimately more serious factor is change in the hardware and software of the recording technology itself. Most of us have had the experience of coming across an old 5.25-inch computer floppy disk, looking at it with amusement – or horror, if it contains important information – then throwing it into a wastebasket because we don’t know anyone with a machine that can read such a thing now. Even if the recording medium hasn’t deteriorated and still contains the data, the technology to translate that data into a useable form – such as words or pictures on a screen – may have largely disappeared.

Many of the information-storage technologies from the middle of the last century were far less vulnerable to these problems. My father’s house also contains boxes of thousands of my mother’s slide photographs of landscapes, wildlife and wildflowers. She used Kodak Ektachrome film and, after nearly 60 years, the colour in the slides is almost as accurate as the day the photos were developed. And I don’t need a complex and long-lost technology to see the photos – just a simple magnifying glass.

Even the device needed to “read” my 8-mm films – an old reel-to-reel projector – is relatively simple. It consists of lenses, sprockets, belts and light bulbs, and it can be maintained and used for decades by an artisan working in a small shop, such as the person I consulted to convert my films into digital form. It’s hard to imagine the same being true in 2070 of an iMac or PC manufactured today.

These problems are all well-known. The solution, we’re told, is to re-record or “migrate” our most important data every few years to new media or new technologies. But there’s a problem with this advice: We’re human. We get distracted, we forget, we get sick, we die. And before we know it, those precious family films and photos locked away in digital form are gone forever.

My advice? Forget about recording videos for your grandchildren to see when they’re adults decades from now. Use your digital camera to take still photographs, have them printed with good inks on high-quality stock, and put them in a photo album – the old-fashioned analog way.

My response to comments left on the Globe and Mail website by readers:

Some people think I’m opposed to new technologies. Nothing could be further from the truth: I’ve written at length about the critical need for more and better technology to solve humankind’s critical problems, especially our energy problems. But I’m not a blind technophile: I think some technologies hurt us as well as benefit us, and which outcome we get depends on whether we use the given technology sensibly.

Of the two problems with information technology I identify in my article—media decay and technology change—the latter is by far the more serious. We can make media that last a long time, and some specialty media today are very stable. But the problem of technology change is inescapable in a competitive capitatlist economy.

This problem itself consist of two sub-problems: first, the complexity of, and second, constant change in, what I call the “interface technology”—that is, the technology that translates the data into a form our eyes can see or ears can hear (that, in other words, “interfaces” between the data and our eyes/ears).

A conventional book needs no interface technology. A 35mm slide needs a magnifying glass. A JPEG data file on a flash drive or a CD needs a phenomenally complex chain of technologies, from the reading device to the monitor that shows the photo. We can’t look at the flash drive and see the image.

The complexity of today’s interface technologies means we’re dependent on a huge array of specialists and subordinate-technologies, all working together seamlessly, to access the data. If something goes wrong with the technology, we usually can’t rely on ourselves to fix the problem. Frankly, this bugs me, because I like my autonomy, and I like to be able to fix the machines that I depend upon (I grew up fixing machines and still do it all the time).

The second sub-problem—constant change in both storage media and interface technologies—means that someone has to make a conscious effort to migrate any given chunk of data at regular intervals to new technologies, and if they EVER forget or make the wrong decision the data can be lost forever.

The combination of 1. high dependency on specialists and 2. the need for regular interventions to preserve data is going to be lethal for a lot of information. It’s interesting that many of the folks here who think we don’t have a problem say something like “As long as people follow certain steps, their data will be secure.” Yes, well, that means the data aren’t secure.

What about storing data in the cloud? To my mind, doing so just further enhances our reliance on outside specialists. And I don’t have any confidence that if I were to leave my data unattended in a cloud for several decades that it would be still there for me to retrieve when I returned, even assuming I could remember how to access it.

I’ll take the box of photos in the basement any time.