Crisis analysis: How much damage can Trump do? (A lot) 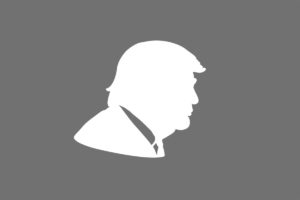 “Okay, here’s what happened,” wrote an American friend after the U.S. election. “Someone threw a switch, and now we’re living in an alternative universe.”

The big problem with alternative universes is that we don’t know how they work. The assumptions, intuitions and rules of thumb we’ve previously used to anticipate events, and guide our navigation, suddenly don’t apply. So we face an exploding range of possible futures, including many that once seemed crazy.

U.S. President Donald Trump’s psychological characteristics make such uncertainty acute. It’s clear, for instance, that Mr. Trump’s lying is less a calculated political strategy than a reflection of his deep inability to distinguish fantasy from reality. He creates a make-believe world for himself and surrounds himself with people who, to advance their narrow ends, help him sustain that world. When Mr. Trump appears to be lying, he’s simply reporting what he sees in his own alternative world, where fantasy and reality mush together.

As Adam Schiff, the ranking Democrat on the House Intelligence Committee, tweeted on March 6: “We must accept possibility that POTUS does not know fact from fiction, right from wrong. That wild claims are not strategic, but worse.”

The entirely predictable chaos of the new administration’s first weeks has many liberals fantasizing that Mr. Trump will be removed from office before his term finishes. But we’ve seen enough of him to know he’s unlikely to leave willingly through any legitimate and lawful political mechanism, like impeachment. Instead, if Mr. Trump feels cornered, he’ll declare that his enemies are conspiring against him and call his supporters – many of whom are heavily armed – to come to his aid.

It’s also possible that Mr. Trump will find his groove, allowing things to settle down. Yet his performance so far suggests his administration will instead lurch from crisis to crisis. To make some sense of these outcomes, I’ve charted the most likely crisis types. Drawing on analysis by a wide range of scholars, I’ve also estimated the probabilities of each type at one, two, and five years into a Trump administration (the latter timeline assumes that Trump is re-elected in 2020).

There are four principal types, I’d argue: financial crisis, civil violence, authoritarianism, and war. Each crisis type then has various possible levels of intensity. “Moderate” authoritarianism could involve, for instance, use of federal resources to intimidate or constrain journalists and judges; substantially increased application of force to track, detain and deport immigrants; and criminalization of protest. Mr. Trump, or in the case of criminalization of protest, his acolytes at the state level are already checking some of these boxes, so I estimate the probability of this degree of authoritarianism in the administration’s first year to be 70 per cent. “Severe” authoritarianism would involve actions like a declaration of a state of emergency, federalization of the National Guard, or suspension of key civil liberties. This outcome is much less likely; even after five years, I don’t think it’s higher than 30 per cent.

A “moderate” war crisis, by my definition, would include any regional conflict between the United States and an intermediate power like Iran, or a great power like China, say in the South China Sea. “Severe” war would involve use of massed military force against a great power like Russia. The category would also include any conflict, for instance, with North Korea, that carries a substantial risk of nuclear escalation. In part, because of Mr. Trump’s expressed hostility towards Iran and China, and his tendency to see all international relations in zero-sum terms, I estimate the five-year probability of a “moderate” war crisis to be high, at 60 per cent.

The four crisis types are likely to be causally linked. In particular, civil violence or war could create conditions that Mr. Trump might use to justify an authoritarian crackdown. Financial crisis could also be a consequence of war. The administration’s decision-making incompetence increases the risk of financial crisis, civil violence, and war. For instance, Mr. Trump’s team of advisers contains little high-level economic expertise, so his administration could be out of its depth should serious trouble develop in financial systems overseas, say in China or Europe.

The specific probabilities that one plugs into this model are not entirely speculative. Experts can argue about the details, but they’re largely in agreement that, for instance, the risk of nuclear war has jumped, which is why The Bulletin of the Atomic Scientists recently moved the minute-hand of its doomsday clock closer to midnight.

Yet the specific probabilities are less important than the overall analytical exercise of categorizing the types of crisis Mr. Trump might create and the causal pathways that might lead to them. It helps us see possible futures more clearly. In Mr. Trump’s alternative universe, we need all the help we can get.

Download Infographic
Read Article in the Globe and Mail

This structured analysis of crisis risks arising from the Trump presidency is intended to stimulate debate. It draws on the model of the causal mechanisms of crisis elaborated in Homer-Dixon et al. (2015) and the general assessments of risks associated with a Trump administration of Diamond (2016), Mounk (2016), Walt (2016) and other analysts. Four main types of crisis are identified, two domestic (civil violence and authoritarianism) and two international (financial crisis and war). These crises will be causally interdependent. In particular, civil violence and/or war will create conditions that could be used to justify authoritarianism (Goldstone and Homer-Dixon, 2016); also, financial crisis could be a cause and/or consequence of war. Decision-making incompetence is assumed to substantially increase the risk of financial crisis, civil violence and war (Homer-Dixon, 2016). Years are dated from January 20, 2017. Crisis intensity is disaggregated into three levels: low, moderate, and severe. Intensity descriptions are illustrative only; not all crises of a particular type and intensity will exhibit all the characteristics listed. The length of a color bar representing a given intensity indicates the estimated probability (in percent) that this intensity will be the maximum achieved for that crisis type during the indicated time period; therefore, as time passes (from year 1 to 5) for a given crisis type, the low-intensity probability cannot increase from its initial value, and the severe-intensity probability cannot decline from its initial value. For a given crisis type and a given time period, the three estimates create a distribution covering all possible intensity outcomes (i.e., the probabilities add up to 100 percent). The probabilities are provisional estimates as of March 8, 2017, based on the author’s knowledge of the relevant scholarship and extant analysis; the severe limitations of such analysis in situations of deep (Knightian) uncertainty are acknowledged. The analysis assumes Trump will not leave or be removed from office and will be reelected in 2020, with the associated aggravation of social, political, and ideological divisions through the election process. It also assumes that Trump will likely respond to any legitimate and lawful efforts to remove him from office by asking his supporters to defend him using any and all means. 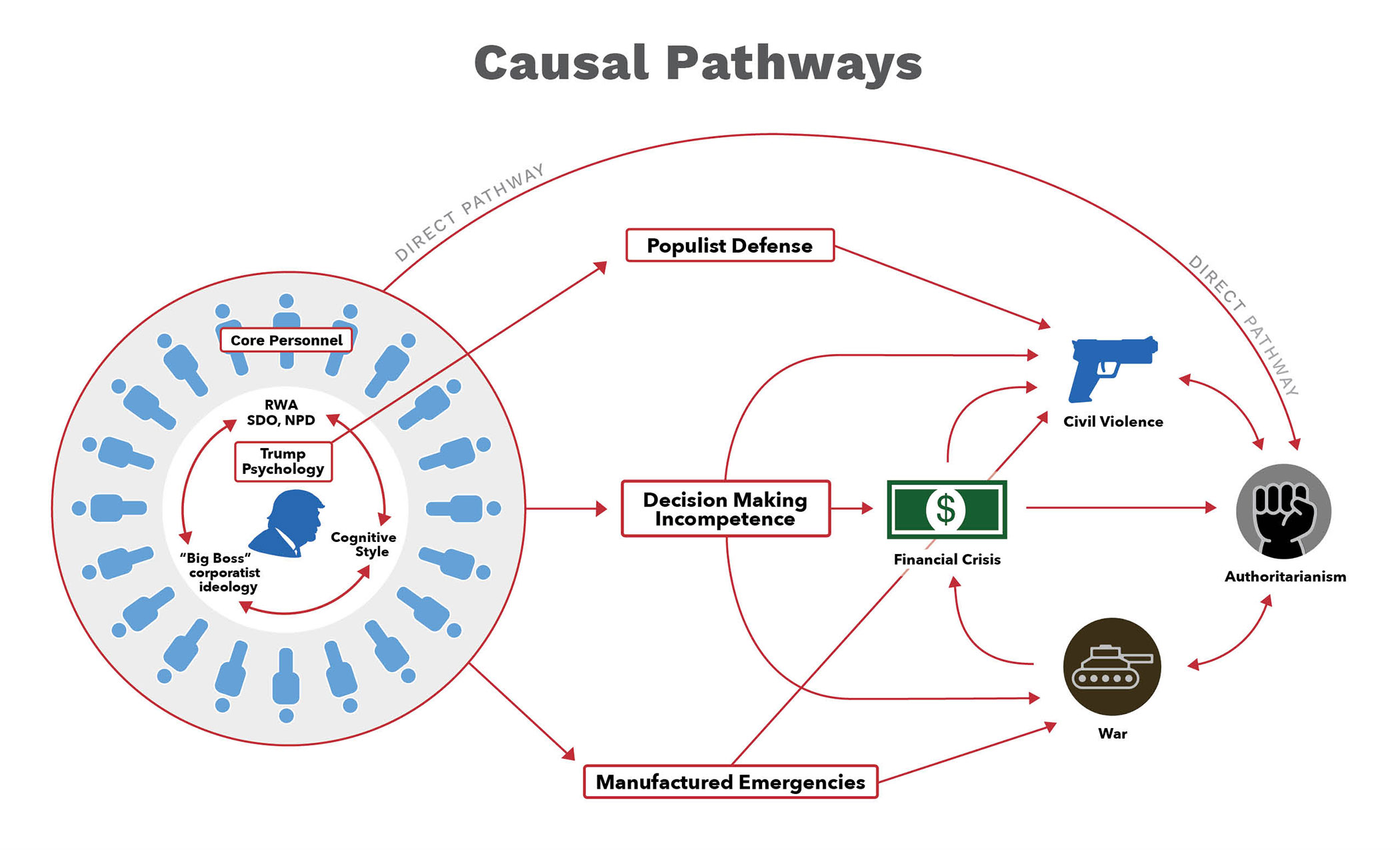 The crisis outcomes and probabilities identified in the previous chart were estimated using the systems analysis shown in the above diagram. The diagram answers the questions:

The diagram traces four hypothesized causal pathways between three salient and widely identified features of Trump’s psychology (on the left) and the four crisis outcomes (on the right). The three features of Trump psychology distinguish between his limbic or emotional impulses, his higher-level cognitive style, and his dominant ideological beliefs about the use of power.

With regards to his emotional impulses, Trump exhibits clear signs of right-wing authoritarianism (RWA), social dominance orientation (SDO), and narcissistic personality disorder (NPD). His cognitive style is marked by an apparent inability to distinguish fantasy from reality. It’s also marked, perhaps even more importantly, by an inability to think systemically: he defaults to dichotomous thinking and tends to assume that problems have single, personified causes.

Finally, his political and decision-making ideology emphasizes the role of single decisive leaders (usually men) at the top of steep corporate power hierarchies. Trump has selected core Administration personnel who share this ideological commitment and who seem, also, incapable of adequately countering his emotional and cognitive deficiencies; indeed, some of these personnel appear to actively magnify these deficiencies.

The diagram identifies four pathways from these elements on the left to four crisis outcomes. The first pathway, at the top, is a direct link to authoritarianism: Trump appears to have no respect for legitimate, constitutional limits on executive authority in the United States, so if structural and institutional constraint is weak or absent, he will accrue to himself as much political power as possible.

The other three pathways involve intervening cognitive or decision-making stages. The pathway labeled Populist Defense would arise in a situation where Trump feels his grip on the Presidency is threatened, perhaps by attempts to begin impeachment proceedings or invoke the 25th Amendment. In such circumstances, he could call his followers to his defense; since many of these people are heavily armed, this response would boost the probability of civil violence.

The pathway labeled Decision-Making Incompetence would arise from serious errors in managing highly complex and tightly coupled economic and political systems. For instance, Trump’s team of advisors contains very little first-tier economic expertise, so his Administration could be out of its depth should trouble develop in financial systems overseas, say in China or Europe, thus increasing the probability of global financial crisis. (The Trump Crisis Risk Analysis chart assumes that, even with competent US economic leadership, some combination of overseas financial crises and a US recession is highly probable in the next five years; economic mismanagement by the Trump Administration will likely magnify the impact of these problems.)

Finally, the pathway labeled Manufactured Emergencies would arise from Trump’s attempts to generate domestic or international crises to justify an authoritarian crackdown.

The right-hand side of the diagram shows hypothesized causal links between the crisis outcomes themselves. For instance, civil violence or war would create conditions conducive to authoritarianism; financial crisis could also be a consequence of war.

None of the indicated pathways is deterministic. Given Trump’s psychological characteristics and leadership style, enormous uncertainty surrounds the behavior and evolution of his Administration, even in the absence of exogenous shocks and surprises. Nor, however, should the four pathways be considered mutually exclusive: several or even all of them could operate during Trump’s tenure.