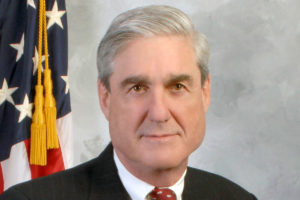 Robert Mueller is an American lawyer and civil servant who was the sixth Director of the Federal Bureau of Investigation.

Special counsel Mueller oversees an aggressively expanding investigation of Russia’s efforts to influence the 2016 presidential election, of possible collusion between the Trump campaign and Russians, and of the President’s apparent attempts to obstruct the FBI’s investigation of these matters.

Mr. Trump desperately wants to end this investigation. It casts doubt on the legitimacy of his presidency, hints that his hold on office is precarious and suggests, ultimately, he isn’t the “winner” he so badly needs to be. So, his slander machine has begun discrediting Mr. Mueller and the inquiry. Supporters such as former house speaker Newt Gingrich are raising questions about the impartiality of the special counsel and the lawyers he’s hiring for his team.

By themselves, though, these attacks won’t give Mr. Trump the latitude he needs to stop the inquiry. He can’t fire Mr. Mueller directly: Instead, he must order deputy Attorney-General Rod Rosenstein to do so. Also, Justice Department regulations say the special counsel can be fired only for “good cause.” In the current environment, any effort by Mr. Trump to have Mr. Mueller fired or to override the department’s regulations would produce a constitutional crisis at the least; it could also cause a revolt among congressional Republicans. Congress might then pass legislation, with enough votes to overcome a presidential veto, establishing an independent counsel – an outcome even worse for the President.

So, commentators have generally concluded that the Mueller inquiry is safe. But two factors will destabilize the current equilibrium over time. The first will be Mr. Trump’s rising motivation to stop Mr. Mueller’s inquiry as it progresses. Pursuing the Russian connection, the special counsel will probably ask the Internal Revenue Service to hand over Mr. Trump’s tax returns. Many astute observers think the reason the President hasn’t released his returns is that they contain proof of compromising financial links with Russia. If that’s indeed the case, Mr. Trump will do everything he can to prevent their release.

The second factor will be Mr. Trump’s manipulation of the broader political environment in which Congress and the presidency operate. As Jack Goldstone, an expert on state failure, and I argued before the 2016 election, Mr. Trump can generate “a new political and social reality – an ‘emergency’ in the U.S. and around the world – that justifies … attacks on democratic institutions.”

The most likely emergency of this kind is a war, because U.S. presidents have the most room for independent action on the international stage. Also, the start of a war almost always produces a “rally round the flag” effect and a big boost in presidential poll numbers. According to Gallup, George W. Bush saw a 13-per-cent surge in approval at the start of the Iraq invasion in 2003. In the opening days of a new war, a similar surge in Mr. Trump’s poll numbers could encourage congressional Republicans to back the President, should he move to fire Mr. Mueller simultaneously.

The United States is closer to a war – perhaps more than one – than any time since 2003. Events could easily go awry with North Korea over its nuclear buildup, Iran over its support for insurgents in Yemen and elsewhere or Russia over an incident in Syrian airspace. And Mr. Trump doesn’t have to go to war intentionally to reap the domestic political gains I’ve described. He could stumble into war through his breathtaking foreign-policy ineptitude and then opportunistically exploit the crisis to fire the special counsel.

After observing Mr. Trump’s first five months in office, no one should now doubt that – if not for the U.S. political system’s checks and balances – the President would accrue to himself dictatorial powers. ‎He’s contemptuous of the rule of law, constraints on executive power, the investigative role of a free press and judicial review. So far, however, those checks and balances have stymied his authoritarian impulses. And to many people’s surprise (but not mine), the President’s sheer administrative and political incompetence has deprived him of opportunities to consolidate and expand his power.

But in foreign policy, the reverse relationship could easily hold: Incompetence could create crisis and crisis could enable authoritarianism. If so, Mr. Trump still has one very powerful card up his sleeve.