And Now the Weather: Nasty and Brutish 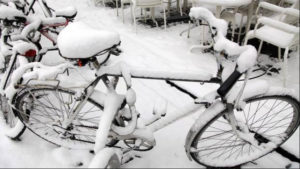 A few weeks ago, in a casual conversation about the world’s crazy weather, an Air Canada pilot made a remark that caught my attention. “When we fly to the Caribbean, we normally cross two or three jet streams,” he said. “Lately, some of our flights across Canada have seemed the same – we’ve crossed two or three high-velocity jet streams.”

It was just an off-hand observation. But the pilot may have noticed something critical about how our changing climate is affecting day-to-day weather.

Normally, jet streams – high-altitude winds that flow at the lower boundary of the stratosphere about 10,000 metres above the Earth’s surface – meander from west to east across North America. So an aircraft travelling south from Central Canada to the Caribbean will usually cross one or more, whereas a plane travelling across Canada will roughly follow their path.

Jet streams sometimes form huge loops over North America, with segments flowing from north to south or south to north – what scientists call meridional flow. These loops can even break into separate pieces. But meridional flow is not the usual pattern, and such winds tend to have lower velocity than their west-to-east counterparts.

Lately, though, we’ve seen more north-to-south jet streams. These winds have dragged cold air out of the Arctic and delivered it to populated regions of North America and Europe.

In the third week of November, for instance, a jet-stream loop with two meridional flows straddled the northern Pacific Ocean and western North America. The loop resembled a huge upside-down U. Beginning southeast of Alaska, the winds travelled north. They then turned right to form a west-to-east flow above the Arctic Circle. Finally, they turned right again to barrel south over the Yukon, British Columbia and Alberta. The result: Across Alberta, temperatures plummeted to record-breaking lows.

Meanwhile, just as cold snowy weather afflicts much of Europe and North America, parts of the Far North are experiencing one of the warmest winters on record. This month’s average temperature in Iqaluit, for instance, is 15 degrees above normal.

What’s going on? It’s always hazardous to link isolated weather events with larger climate patterns. But the connection between these developments is probably loss of Arctic sea ice.

In recent summers, large areas of open water have appeared in the Arctic Ocean. In September, in fact, sea-ice extent was about a third lower than the 1979-2000 average, and its extent in November was the second lowest since satellites began taking records. Arctic ice is vanishing partly because higher summer temperatures are melting it, partly because incoming ocean currents are warmer and partly because energy released from the newly exposed water changes major air currents across the Arctic Ocean, producing winds that push remaining ice down the coasts of Greenland into the Atlantic.

This vast release of heat, a process that extends well into autumn, could be a key cause of the bizarre weather we’re seeing. Usually, in early winter, a basin of low-pressure air forms over the Arctic Ocean’s cold sea ice. Jet streams tend to travel west to east along this basin’s southern edge, creating a huge circular flow – the polar vortex – that travels counterclockwise around the Arctic. This flow separates the Arctic’s cold air from warmer air farther south.

According to new research by leading Arctic climate scientists, last winter – first in December, then again in February – heat released in the fall from the Arctic’s large expanse of open water helped create bulges of high-pressure air over the Arctic that destabilized the polar vortex. The jet streams broke into disconnected segments, many travelling north to south and pulling bitterly cold air into North America, Europe and eastern China.

“This change in wind directions is called the Warm Arctic- Cold Continents climate pattern,” writes James Overland of the U.S. National Oceanic and Atmospheric Administration. “The jet-stream breakdown last winter was the most extreme in 145 years of record. Loss of sea ice is certainly not the whole story behind cold mid-latitude winters, but it’s a constant push in that direction.”

Scientists can’t say yet whether the same thing is occurring this winter. But the jet-stream maps for the Northern Hemisphere in late November show nothing resembling a continuous flow around the pole. Instead, the jet streams were broken into discontinuous bits, pieces, loops and circles, with many north-to- south flows over North America and Eurasia.

If you’re interested in learning more about the “warm Arctic-cold continents” climate pattern, please click on the following link to see the “Atmosphere” subsection of the 2010 NOAA Arctic Report Card, written by Overland et al.: http://www.arctic.noaa.gov/reportcard/atmosphere.html Scroll down to the two paragraphs immediately above Figures A7a through A7b.

And here is a map of the Nov 23 northern-hemisphere jet streams showing the inverted-U loop over Alaska: